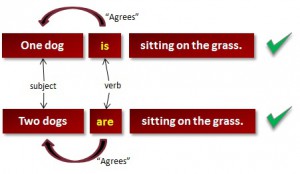 – Subjects must agree with verbs in number.

e.g. My phone is on the table.

Boys run across the street.

A bird flies from tree to tree.

* This rule cannot be applied to verbs used in the past simple tense if they are not followed by any other helping verbs. However, these rules apply to helping verbs if they are used with a main verb.

e.g. My mother has talked to an English literature teacher.

– Such pronouns as somebody, anybody, nobody, no one, someone, anyone, everyone, each are singular.

e.g. Nobody is answering my calls.

– Two or more singular subjects joined by and act as a plural compound subject.

e.g. My brother and I are going to the cinema.

* Note that as well as, together with, along with, are not equal to an “and.” Hence, subjects joined by these phrases do not make a plural compound subject.

e.g. Our professor as well as her students understands that educational reforms are necessary.

– The pronouns either and neither are singular. However, they can become plural if followed with a prepositional phrase starting with “of.”

e.g. Either is okay with me.

Neither of you two have done your homework!

– When subjects are joined by “or/nor,” the verb must be agreed with the subject closest to it.

e.g. Either our sportsmen or their sportsmen are going to win today. No draws!

– Certain nouns require a singular verb even though they have an -s ending. For example: mathematics, civics, news, dollars, and measles. However, scissors, trousers, tweezers, and shears are plural.

– Who, whom, which, that can be either plural or singular—it depends on the noun they are connected to.

e.g. The visitors who have already registered are invited to the main hall!