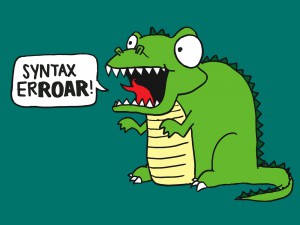 Syntax is a crucial part of English grammar. In general, syntax is a system of principles used to organize words in sentences. Though many languages (such as German or Russian) have rather vague rules for the order of words in a sentence, the English language is known for its strict rules demanding that all words stand in their own places.

Why Do You Need It?

Although linguists definitely enjoy inventing new rules to make your studying more difficult, syntax is in fact needed for other people to understand you. If you put words in a wrong order, it will be harder (or impossible) for people to understand what you intend to say. This is because all parts of a sentence in the English language are in strong semantic correlation (in other words, they all play a role in making a sentence understandable), and ruining this correlation leads to the obstruction of meaning.

– Sentences mainly consist of two parts: subjects and predicates. A subject is a doer, or an object on which an action is aimed; a predicate is a word that expresses the quality, condition, or action of a subject.

– Each sentence consists of clauses. There may be only one independent clause (a part of a sentence—or a whole sentence—that has a complete meaning), or two or more of them. In the latter case, clauses are separated with a semicolon.

Nouns are used to describe people, objects, phenomenons, and so on.

Adjectives describe a quality of a subject to which they are attached.

Pronouns are needed to replace nouns within sentences.

Adverbs are used to describe or modify verbs; they are similar to adjectives, but are connected to verbs, not nouns.

Prepositions link nouns and pronouns to other words in a sentence, as well as conjunctions.

– Verbs have active and passive forms, and tenses. Respective to which voice and/or tense is used, the word order in a sentence may change.

– The word order also changes in questions and negative sentences.

Subject + Verb + Object
This is the most common word order.
Example: George flies a kite.

Place and Time
In English, place is usually before time.
Example: I go to the Seattle Chess Club every Saturday afternoon.

Adverbs of Frequency
Adverbs that show how often something takes place (such as always, rarely, sometimes) are commonly before a verb.

Example: Bill often goes to house music clubs to dance.
But when there is a “to be” verb, adverbs of frequency go after a verb.

Example: He is rarely on time for work.
Adverbs of frequency can also go in between two verbs.

Example: I will always remember my sister with fondness.