The Phenomenon of Women’s Bodybuilding 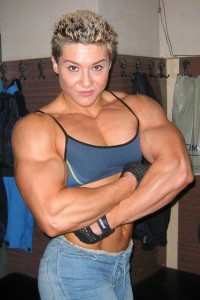 Muscular women cannot be considered a new phenomenon. Ancient myths tell us about the Amazons—female warriors who inhabited the wilderness and who used to kill every male child born in their community. They were known as perfect fighters and archers; in order to be capable of competing with men in warfare and physical strength, Amazons possessed strong and trained bodies. In reality, however, one could hardly run into a muscular woman, at least until the beginning of the 19th century, when big, strong women demonstrating wonders of physical strength could be seen almost in any circus (Muscle Insider). Still, muscular women remained an exotic rarity.

As time passed, the situation began to change significantly. Bodybuilding had remained exclusively a male sport until the year 1977, when Henry McGhee, an employee of the Downtown Canton YMCA, introduced his idea that women should share the opportunity to display their physical abilities the way men had done for years. He had created the United States Women’s Bodybuilding Association, and though it did not last long, women across the country took notice (Muscle Insider). In 1980, Rachel McLish won the first Ms. Olympia contest, and can be considered the start to the spreading of female bodybuilding around the world.

Today, you still can walk down the street without running even into a single female bodybuilder, though the phenomenon of feminine physique has gained a significant popularity. Bodybuilding is a way for certain women to express themselves and, perhaps, demonstrate and assure their equality with men in terms of physical capabilities. Unfortunately, loads taken on that are naturally not typical for the female human body can result in severe health problems.

Among the most common problems female bodybuilders face regularly is amenorrhea, which is an absence of menstrual periods. This happens due to intense exercises and low body fat levels, or exercise-related hormones. Also, female bodybuilders have developed a new kind of eating disorder, usually called EDBT (eating disorder, bodybuilder type). This disorder is characterized by high-protein, high calorie, and low-fat diets, which are consumed in certain periods and sequences during the day. The disorder appears in a women’s fear to eat food if the precise caloric intake of meals is unknown. Besides, the wide use of steroids, without which none can gain such impressive muscular mass as bodybuilders usually do, increases the levels of testosterone in their bodies. As a result, a woman’s voice tone lowers, facial hair appears, their figure becomes more masculine, and the jaw becomes squared. In addition, a woman starts to experience male pattern baldness and changes in their reproductive system, and her breasts decrease in size (LiveStrong).

Though today no one prohibits women from doing bodybuilding, this type of physical activity causes severe physiological and aesthetic changes in the human female body. A woman starts to look more like a man, and experiences serious problems, mostly concerning the reproductive system. Also, some female bodybuilders experience an eating disorder that bars them from eating when the precise caloric intake of a meal is unknown. It is difficult to tell whether bodybuilding is or is not an occupation for women, but it definitely affects their appearance as being attractive to the opposite sex and affects their bodies in adverse ways.