The History of Chess 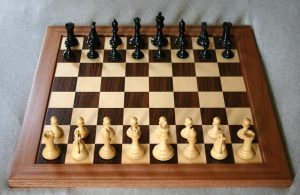 Chess is perhaps the most popular and treasured board game in the world. Millions of people play it daily, and millions of dollars of sponsorship go into the world championships of chess. It seems be getting even more popular as the years roll on. But how much do we know of its history, and where the royal game came from? This special game originated in India in the 6th century—but that is just the start of learning the beginnings of chess.

There are many legends surrounding the origin of chess, and also the rules of the game have transformed so much during its about 1500 years of history, that it is difficult to trace exactly when “chess” came into being as we know it. In each region, chess took on different rules, pieces, boards, and such. However, according to Chess.com, “Today we know that chess originated from the Gupta Empire (600CE), of India. The pieces come from the primary military elements of that time: the infantry, the elephants, the cavalry and the chariots” (“History of Chess: The Basics”). Some experts have claimed the game could have originated in China, but these assessments are in the minority. In India, the game was referred to as Chaturanga, and has been mentioned in Persian manuscripts.

From India, chess traveled to Persia. As stated from Medium.com, “In 7th Century AD it was adopted as Satranj in Sassanid Persia. Several variations of chess evolved in Persia” (Naval, Saini). The queen and bishop had limited movement at this time, unlike the wide movement it has now. According to Ancientchess.com, “The form of chess which finally arrived in Europe was already being played in Persia some 1,350 years ago, when that area of the world was conquered by Muslim armies in the mid 7th century. The game became very popular in the Muslim world, and it was carried back, throughout Islam, across North Africa and eventually into Europe” (“Chess History”). So, the Muslim world was responsible for the greater migration of the game. Also, in Persia, the first recognizable chess pieces began to emerge that are similar to our modern ones. In addition, before chess became widespread in Europe, it was brought to Spain and Sicily through the Moors, who were Muslim inhabitants in those areas. This was around 800 AD. Another big event was that by 900 AD, Muslim chess players were writing books on the techniques of chess. This can be said to be the first writings on chess theory (Murray, H. J. R).

Though our international chess game has many variants in many countries, the most popular one played today around the world started to become a pastime in Europe around 1000 AD. According to Ancientchess,com, “…the chess which came to Europe from Asia, passing from one culture to another, remained virtually unchanged for almost a millennium. Even as pieces changed shape and identity, the rules of the game remained remarkably stable. The first known printed occurrence of the new rules is dated 1497 — but that manuscript seems to indicate that the new game was already generally known” (“Chess History”). Chess spread like a wildfire throughout Europe after the rules had been changed so that the queen and bishop had greater mobility, and was even called “mad queen chess” and other variations on this title. With the newfound speed of chess, the game become more exciting and nuanced. This was the start of our modern chess, and it seems the popularity and growth of chess has not stopped since (Naval, Saini).

Chess is a game of about 1,500 years that originated in India, traveled to Persia, and through Muslim influence, spread throughout Europe. In that progression, its rules have drastically changed, and its pieces have also transformed. There are still several variations of chess in multiple countries, like China, Japan, Korea, and more. However, the international chess we play today was developed in Europe by giving the queen and bishop greater power—making the game more thrilling, and at the same time, subtle.

“History of Chess: The Basics.” Chess.com, Chess.com, 15 May 2018, www.chess.com/article/view/the-history-of-chess.