Example of a Plan for a Novella 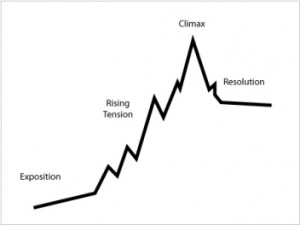 In my previous blog post, I tried to show why having a plan for a story is important. Then I thought that illustrating what I said would be fun, so I created a sample plan.

It’s a plan of a short thriller story I’ve made up just now, so its artistic value could be close to zero. Or, if you want, you can try to make it more interesting, and write your own story following this plan. We will proofread and edit them, and post the one that we liked most on our website!

So, here’s the plan.

Five chapters with an epilogue. Two teenagers (Josh and Michael), who live in New York, study urban legends. They hear a new rumor about something unknown that dwells in the depths of the city’s subway, which has already caused the disappearance of several people. To check it out, Josh and Michael decide to start an “expedition” to find out if the rumor is true or false. They gather a group of people called “diggers,” and go underground. No one comes back, but not because of some monsters, but because they get lost, fall in industrial holes, get hit by electricity, and so on.

Chapter 2. Josh learns the new rumor about missing people in the New York subway; people seem to disappear right from platforms, one found dead. Expand on the rumor, include newspaper headlines. Michael watches a TV show (on a channel about everything “supernatural”) about disappearances. Guys decide to investigate, and realize they need a group of professional diggers to explore the subway.

Chapter 3. Josh and Michael seek diggers, and look for people interested in urban legends and who would like to check recent rumors out. They get contacted by a former digger who warns them not to go underground because strange things happen there and this is why he quit. The guys don’t listen; they find three people ready to go underground—two men and one woman (Jake, Kim, and Sarah).

Chapter 4. Describe preparations and how the group descends into the subway. Descriptions of subway tunnels and corridors; diggers exchange creepy stories about the New York subway. The group moves towards some “way too deep subway,” as diggers call it—some abandoned military project from the early 40s.

Chapter 5. Deep subway. The group walks about 20 minutes, and then feel that “the air is strange.” Want to go back, but can’t find an exit, though they walked straight the whole time. Suddenly they notice that Sarah is missing—they hear her voice calling for help from one of the tunnel’s offshoots, and rush there, but find no one, and the voice starts calling from another location. Josh starts to panic and runs away screaming; Michael wants to chase him, but Kim and Jake don’t let him go, because it’s easy to get lost in tunnels. Josh’s voice suddenly breaks off. The diggers decide to go back to the surface to call for help for Sarah and Josh; on their way back, Jake suddenly says he wants to sleep, and quickly falls into a deep sleep. Josh and Kim try to carry him, but their flashlights shut off. In the dark, they hear Josh and Sarah’s voices shouting out some abracadabra. At the end of the chapter, they realize that they hear many voices from all directions, and these voices keep getting closer.

Epilogue. TV news report about five people who went underground and did not return.

Well, here is the plan. I paid most of my attention to the fifth chapter, as you can see. I did not intend to do it, but then I got excited about how things developed. If you choose to submit your story to us, you can write this chapter in your own way. Anyways, I decided not to edit the plan. Hope it’s helpful.