The Effects of Chess on Personality 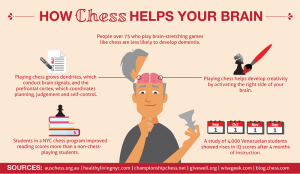 Chess is commonly known as a game (or even a sport) which enhances one’s mental capabilities. What most people who do not play chess on a regular basis know is how it is beneficial for the development of one’s personality as a well (Croters 56). It provides practitioners with an added interest in education, a social arena where one can feel accepted easily, and increased stamina in regard to attention.

I had been a sophomore in high school without having any close friends other than my twin brother. I suffered from ADD and my grades were rather low in terms of the average. Suffering from depression almost on a daily basis, I had suicidal thoughts.

My father began to teach me chess when I was 16 years old and I played with him regularly, starting from the first day I learned the moves of the game. I began to read books on chess in order to understand how to win against my father. After about two months of studying chess books, I prevailed against him. I was ecstatic to win against my father in chess – part of it was being better than my father at an activity – another reason was I was delighted to discover how studying itself was worthwhile.

Through my interest in chess, I gradually became a better student in school and my grades began to normalize and even exceed expectations. I found I enjoyed the act of studying, as I knew what benefits I would reap from it. I enjoyed the process of constantly improving, and wanting to achieve a certain mark. Even though in those days I probably spent more hours playing chess than on my schoolwork, I found a new joy for education.

After joining my high school chess team, I befriended a number of individuals who were influential in reshaping my personality. They were not ruffians who hit mailboxes with baseball bats at night – they were valedictorians and those who challenged their minds as if it was a sport. They taught me I could learn and have a splendid time simultaneously.

As a student with ADD, playing constant chess truly sharpened my attention. In tournaments, we had to play at least two hours per game in sometimes five-game sets. Outside of tournaments, some games I played lasted five hours or longer. This practice surely reversed my weakness in attention. Before playing chess, it was difficult for me to sit in a chair for over five minutes without fidgeting. After becoming a tournament chess player, I could sit for hours without barely moving, contemplating the 64 squares and the course my arsenal would take.

After achieving the level of a national master in chess, I can safely say chess has given me an educational direction, an increase in social activity, and a cure for ADD. Though chess may be seen as a mental sport, it has been a catalyst which has transformed my personality.